"The Snowman", by Jo Nesbo 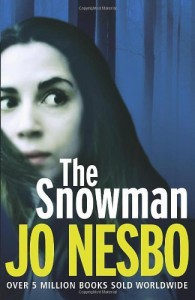 Book #7, in the Harry Hole series

Mr. Nesbo has certainly created a disturbing, spine-chilling and macabre story with this one. The snow is beginning to fall. A young boy is awakened and finds that his mother has disappeared, wet footprints are on the stairs and he sees a snowman with black eyes positioned to look at the bedroom window around its neck is his mother’s pink scarf……if you are a little isn’t it a way to scare you death or leave an unimaginable impression that will haunt you for a very long time. Leave it to a master storyteller to write such a story….

The book begins in 1980 but the bulk of the story is in the present day. After a blood- chilling opening DI Harry Hole makes his appearance with his new female partner Katrine Bratt and we are in the standard police procedural territory.

Meantime, “The Snowman” is hard at work…… mothers and wives are disappearing and when a gruesome discovery is made: a severed head of a woman in placed on top of a snowman….. The pressure mounts for Harry to find the snowman….Mr. Nesbo took his chance to show us his stuff as a writer at every corner.

“The Snowman” has its own pulse that keeps it moving along with very gruesome images and eccentric flashbacks concerning a hard drinking cop. The meat of the story is the hunt for the Snowman, a serial killer who leaves an actual snowman on the site of his crimes. Mr. Nesbo gives us plenty of atmosphere through his protagonist’s observations and significant details. This thriller gives us suspense and a veritable gallery of memorable suspects and most of all a first-class roller-coaster ride. On the down side, we have many disjointed and incomprehensible plot twists and series of red herrings to content with, it gets a little confusing at time.

Although “The Snowman” put chills on my bones, it is by no means one of my preferred books by this author.