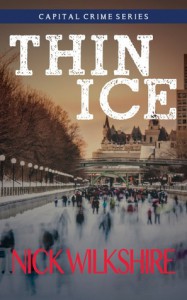 “Thin Ice” is a suspenseful police procedural set in Ottawa and revolves around the murder investigation of a rookie hockey player recently signed by the Ottawa Raftsmen.

I enjoyed reading this story adding to the appeal is the setting, Ottawa is a rich and colourful city where hockey is way of life. This is a fast-pace and dialogue driven mystery that follows two homicides detectives Jack Smith and Dave Marshall on the tail of suspects when a young hockey superstar is murdered on a morning jog.

I was tuned in from the opening page and had a hard time putting this story down. The huge cast of suspects were intriguing characters, very different on their own but all had a connection with Curtis Ritchie, the hockey sensation. As the case moved on and the investigation intensified it is evident the author is a lawyer who excels in asking questions and twisting them around to get what he wants. The story has pretty interesting police procedural and dabs somewhat into the personal life of the protagonists. This story is well written with plot twists to detail us and a great ending hard to see coming. Good pacing all through and played out by interesting characters.

You don’t need to be a fan of hockey to enjoy this book. I am not by a long shot although being Canadian it was easy to make parallels with the NHL and the Ottawa Senators ….and the shenanigans going on….