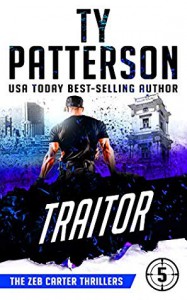 What can I say except this is one exhausting read and a heck of a good one on top. For those looking for thrilling and never ending action, this latest will more than satisfied your craving. In “Traitor” Mr. Patterson does not leave Zeb any time to rest now that he is the target of all the assassins around the word. The best and most respected operator has been framed, labeled a traitor and a kill order has been placed.

The story line is a riveting one and could easily be ripped from headlines. In Libya, Zeb is in pursuit of the world’s deadliest terrorist when the first kill team attacks him. But this is the start of a hunting game…Can he stay alive….well of course he did …as in all good series the protagonist is needed for the sequel (no secret there).

This is by far not a boring story, from the first chapter till the very last we have Zeb jumping many hurdles and killing many to stay alive in order to accomplish what he came to do. Along the way, we are into one crazy scene after the other giving us lots of excitement with many of twists and turns popping out continually. Mr. Patterson also did not forget to give us plenty of violence to make us cringe. This thriller is so vividly describe that you can picture every move in your mind. As for the characters, the usual gang eventually shows up to save the day, they play strong parts as expected. All good by the end…good guys win and bad guys lose…

This is another good suspense written by one of my favourite authors.