"The Last High", by Daniel Kalla 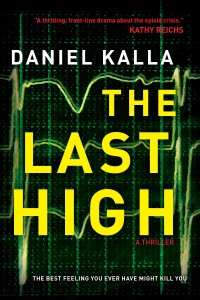 This latest is another winner, one of those stories that grab your attention from the start, an awesome medical thriller that deals with the terrible opioid crisis. The Last High (TLH) is carfentanil, a derivative of fentanyl a drug so lethal who ever tries it may end up dead. The story takes place in Vancouver BC one of the cities where the crisis is at the highest level but although this city is in Canada, the crisis is certainly a worldwide occurrence that kills thousands of users. Mr. Kalla, an ER doctor by profession has penned a story of what happens when teens show up in the ER from a deadly drug overdose.

The development is said in alternate chapters from the point of view of ER doctors, the toxicologist, the homicide detectives, the dealers and their associates. The pace is a bit slow at first but as good thriller does it soon springs into action and from then on we are into a rollicking tempo till the very end. The plot has a lot of intrigue and some violence after all dealing with the Triad, major drug gangs and petty dealers, one cannot pussyfoot around. We find a lot of medical jargon and chemical references in the book regarding the illicit drug world; I learned a few things (actually a lot)……and following the cleaver police force at work we find out the tricks they need to do in order to get the drugs off the streets. “Chapeau” to them. Thank you, Mr. Kalla for writing such a lively and timely story to enlighten us as well as for our enjoyment.

I received an ARC from the publisher Simon & Schuster for my thoughts.