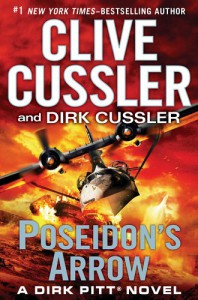 The plot detail is from Wikipedia, short and precise I couldn't have said it better, although I did take the time and liberty to complement it with my own thoughts.

“This book is about a secret prototype attack submarine the United States is developing and the efforts of a ruthless multimillionaire who wants to seize it by any means and sell it for a hefty profit. This millionaire antagonist also is bent on monopolizing most of the world’s rare earth mineral mining operations and sells these minerals for a huge profit. This novel has many subplots and is set in a variety setting throughout the world. These subplots involve many characters, as well.

This adventure takes the NUMA group on a wild trip and opens in the usual format with a prologue setting the stage this time in the Indian Ocean in October 1943. Then the setting shifts to the present day near a mining facility in the Majave Desert where we meet the villains and the succeeding chapters could only leave us breathless as the many characters drifts in and out of the story, each time with abysmal intensity.”

This thriller is an action packed tale of international intrigue, old fashion adventure, is very intense and hard to put down. Once again the father and son team bring their fictional duo and the NUMA team in a rip-roaring, globe-spanning adventure I enjoyed quite a bit.