"The House of Special Purpose", by John Boyne 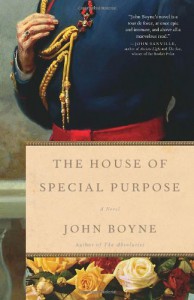 I love how John Boyne spins historical events and makes his stories unexpectedly compelling reads. “The House of Special Purpose” is a wonderful mix of trodden grounds of the fall of the Romanov Dynasty with a fictional and well thought narrative that goes back and forth in time in and snippets of important moments in the life of Georgy and Zoya Jackmenev, two of the survivors. This fiction brings to life the lovely myth that has sustained the romantics at heart for many years, the speculation that Anastasia may have escaped the tragedy.

Told in a series of flashbacks, 82 year old Georgy reminisces on his past as he sits by his wife deathbed. Haunted by what he had witnessed he recounts how as a young man he was ripped from an impoverished home and thrust into the inner circle of the Romanovs as bodyguard to Tsarevich Alexei, heir to the empire, and eventually fell in love with the Grand Duchess Anastasia. He inevitably became privy to the secrets of the Tsars and his family, the machination of Rasputin and events leading to the final collapse of the empire. His memories reveal shocking secrets…..

This is also a touching love story of two young people in a rebellious Russia and how they gave up everything in order for their love to survive. The story jumps in time and places a lot and you really need to kept up and stay focus otherwise the switchback ride can be quite disconcerting. Mr. Boyne has the fantastic skill of engaging his readers by the ways he smoothly intertwines facts and fiction together. I relish how the factual characters were depicted in an intriguing, honest and enjoyable way. The story may embellish aspects during this period in Imperial Russia in ways some may dislike I found it to be a refreshing and an audaciously imagined alternate in history.