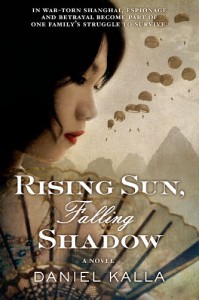 This wonderful story continues the intrigue, the medical drama and the love stories that began with “The Far Side of the Sky”. Although this sequel can be read on its own I strongly suggest reading the first to connect with the characters and understanding them better while each is coping with a shattering loss.

During the Second World War Shanghai was one of the last havens for Jewish refugees, after the Japanese occupation the Jewish population was forced into the squalid ghetto of Hongkew. Life was no picnic…….There is a fair amount of characters to get to know and once I shorted them all out it was easy to let my imagination follow the tempo as the story moved along at a briskly pace.

When the Nazis tighten their control on Japanese officials, tension in the ghetto mounted and life for the residents became hell. We follow the Adler family, their friends and allies in their struggle, living in deplorable conditions and forced to confront one dilemma after another in order to survive. Each moment fearing the Kempeitai, as well as the Nazis, hiding in basement, and defying each other in order to join the Resistance, some had to run the Jewish hospital and give lifesaving surgery to their tormentors while the young smuggled cigarettes and jewelry for some extra money.

The author has built tension throughout his words and captured the sounds and smells and tastes of Shanghai during this terrible time, creating an incredible and terrifying world. This emotional thought provoking tale of love and loss, courage and betrayal tells how far people will go to save those they love. The story is very character driven and focusses mainly on their interaction and how they coped.

This is an exciting page turner very hard to put down. I am happy to know there is a sequel in the making.