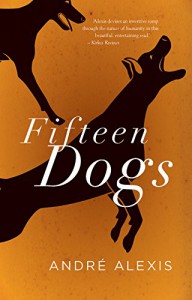 WINNER OF THE 2015 GILLER PRIZE

FINALIST FOR THE 2015 TORONTO BOOK AWARDS

Fantasy is not usually my pick for entertainment but since this sounded totally different and to boot written by a prestigious award winner why not give it a go and I never regretted my decision. This is moral fable with animal characters.

The story is a spin onto Modern Greek mythology where the author frames his storyline around a disagreement between Zeus’s two sons, Apollo and Hermes who argues whether animals would be happier with human intellect. With this, fifteen dogs in a kennel in Toronto awaken to the unfamiliar sense of awareness and along with the dogs we are taken through their unfamiliar journey and what a journey it was.

This slim and elegantly written novel possessed of both intelligence and deep feeling is quite refreshing. The dramatizing of human qualities, language and abilities are well orchestrated. It surely was a feat to manage such a large cast and the various lines of actions without losing the momentum of the novel. The pack hierarchy is brutal. These brave furry tails can only struggle in the violent streets of Toronto in hope to find a helping hand or waiting patiently for a human friend that will never come…. The plots include murder and euthanasia, the death of humans and the narrative show how the dogs respond. . The book also includes several poems composed by Prince, one of the dogs. Love and friendship and strong bond with humans are covered in the narrative. Quite a range of topics is fantasized through this wonderful apologue.

“What is my dog thinking?” will surely be on any readers mind after reading this book.