"The Winemaker's Wife", by Kristin Harmel 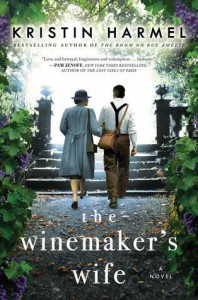 This is a complex story of love, betrayal and courage told with exceptional skill. Written in heart wrenching prose “The Winemaker’s Wife” goes back and forth between time and the present: Champagne, 1940 and 2019.

The story gives us a different perspective of Germany occupied France. As it opens Ines has just married Michel, then owner of the champagne house Maison Chauveau when the Germans invade. As the danger mounts Michel joins the resistance. When rumours about Jews being deported… fear sets in… Celine, Michel’s chef de cave’s wife, is half Jewish….. They are afraid of being exposed…

Ines and Celine are the main voices and tell their point of views in alternate chapters as the war moves on. Celine tends to follow her heart and Ines eventually makes a dangerous mistake with a Nazi collaborator….Their side is told with warmth and emotions…

In New York Grandmother Edith shows up at Liv Kent’s home insisting on a trip to France, she has something in mind and wants to share her tragic story with her granddaughter.

Edith and Liv are the driving voices when the story moves to the present.

Actually we have two stories and at first I was wondering where the connection might be. The author keeps giving tidbits of information teasing till the denouement. The suspense is held throughout and very well-done. Although the plot moves very slowly and nothing melodramatic happens well into the novel I was nevertheless deeply engaged from the get-go. This tragic story inspired by real events tells how people make desperate choices in order to survive and is one that offers many twists which I did not see coming.

War stories are my favourite, even if they are fictional there is always some truth to them. “The Winemaker’s Wife” is set amid the champagne vineyards of northern France and we have a small view of how it may have operated during this hard time…right or wrong I do not care, the description is vivid and the drama lively….

Eventually the past and present merge and we are back to the caves of Maison Chauveau. Well-done.