"Children to a Degree", by Horst Christian 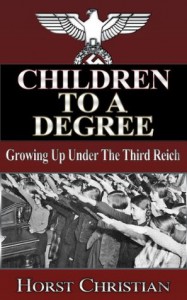 Growing Up Under Third Reich book #1

“Children to a Degree”, a prequel to “Loyal to a Degree”, is based on a true story, its 191 pages recounts how young boys by the time they were old enough to start school were fed a steady diet of propaganda under the Third Reich and often encouraged to turn on family, friends and neighbours.

The author has created a captivating fiction taken from his experiences while living in Germany during the 30’sand 40’s. His simple prose and dialogue are very down to earth and tell us what happened to boys during that time. Where he excels is in the strong descriptions of events he gives us. His soft words are so effective that we can easily have the feeling being transported in time and place.

Following Karl and Howard, two young boys, is an fascinating journey where we also see the roles of men and women in the Third Reich, the draconian system imposed on the population, the disappearance into camps, the punishment on those who stepped the wrong way, I will not elaborate further since many books recount this terrible time. I had many opportunities to question myself: why was this allowed to happen.

This novel is more than an interesting insight into the indoctrination of the children in Germany during the war years, it also highlights how scared the parents were and how strongly they wanted to protect their children by submitting to the regime desire. (Actually they had little choice).

This is definitely a story said from the heart.