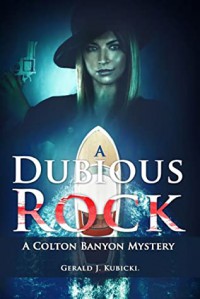 All books in the “Dubious” series are an action adventure blended with today’s world issue. In this latest, the topic centers on Rock Nodules. Although part of a series, “A Dubious Rock” can be read on its own.

Mr. Kubicki follows his usual pattern: fast-paced, lots of action, over the top storyline that holds us captive from the opening words to the last and a bunch of loveable and not so loveable characters with some very villain ones to shoot at. Yes, we have a lot of killing, no fear; the scenes are not too descriptive. The story moves along at a good pace and is smoothly said with a clean language. No cuss words from anyone. Mr. Kubicki through the time has mellowed his style when it concerns his female characters. At the beginning they were ridiculously depicted now they are simply badass and very entertaining…

Colton Banyon and his team are called in Long Beach California to solve a mystery: identify a young woman who has been murdered and the enigma behind those strange rocks found at the bottom of her boat. As the case moves on, Colton discovers a huge conspiracy involving many bigwigs…...and the fun begins…enjoy.