"The Absolutist", by John Boyne 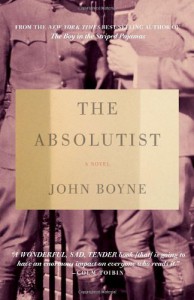 This story is about Tristan Sadler, a young veteran of World War 1 who is dealing with intense shame and guilt, a consequence of his involvement in the war. Told in the first person narrative by the main character, Tristan recounts how he and his best friend, Will Bancroft, faced an intense personal dilemma, some emotions had to kept secret and never displayed or shared with others. It took a huge amount of courage to fight their internal feelings and the war they were waging on the battle field that faced them.

The story opens in September 1919 with twenty one year old Tristan Sadler on a train from London to Norwich to deliver a package of letters to Marian, Will Bancroft’s sister. The story unfolds slowly and moves between the war and his visit with Marian. She slowly finds out the truth about her brother and what really happened to him. Tristan and Will had meet during basic training at Aldershot and they soon developed a close relationship that lasted till they served in the trenches of Picardy where Will was court-martialed for cowardice and executed on the battlefield in 1916.

Mr. Boyne prose concentrates on emotions throughout this wartime story which depicts primarily the relationship between the two soldiers. The brutal and very descriptive war scenes in general are told in the present tense and the narrative shifts to the past tense when Tristan reveals his true feelings to Marian.