"Death of a Red Heroine", by Qiu Xiaolong 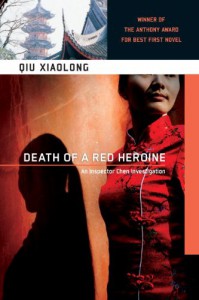 Book 1, in the Inspector Chen series

This novel is something more than a suspenseful whodunit crime story it is one that explore in some ways the old-socialist/new capitalist tensions that were central to China’s ideology post-Tiananmen Square. In the early 1990 it was a difficult time of transition, new rules were being written and it was hard to know how to act. This story offers a peek into the often crooked world in which the population had to work in.

Chief Inspector Chen Cao of the Shanghai Police Bureau’s Special Case Squad is the lead character and we have a huge cast of players with foreign name to grasp (at least for me) but the author has made it easy by making them very human and distinguishable. “Death of a Red Heroine” provides an idea how Chinese life may have been then. The author’s background being in literature he takes advantage of this by inserting snippets of famous Chinese poems as well as his own (through his protagonist) throughout the drama. The story is well-written although I did find it arduous to read at times (I am not of fan of poetry). The suspense is refreshing but I found the investigation to be slow and faltering. There is little build-up intensity to keep us on the edge of our seat. Food, yes food, luscious foods are mentioned so many times that by the end I was tempted to try my hands at some of the recipes…:)

The story follows the intrepid attempts of Chen to discover the person responsible for the murder of Guan Hongying. Recently promoted Chen sets out to prove himself by solving the case. The flow of information seems to come from seniors party members and this political interference not only added pressure on Chen to close the case it also played hardship on his personal life…..

This book written in 2000 is the debut novel in a long series. The style is very deferent to the one found with American and English writers, some adjustment is needed to enjoy it at its fullest. Although, a good novel I am not certain I will continue further with this series…